Echoes From The Infantry – Frank Nappi

Echoes From The Infantry 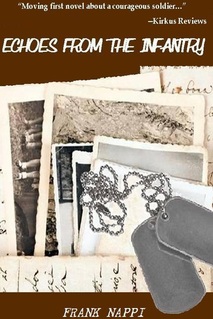 Echoes From The Infantry is the tale of one Long Island World War II veteran, the misery of combat, and the powerful emotional bonds that brought him home to Rockaway Beach and the love of his life. It is about a father and son, and their ultimately redeeming struggle to understand each other’s worlds – one a world at war, the other shaped by its veterans.

All James McCleary wants to do is forget the horrors of the battlefield. All his son John wants is to know his father. But memory is unforgiving, and James remains locked inside his own mind, unable to embrace his wife and children as he would like to. Meanwhile, John wrestles with troubling recollections of life with this enigmatic man he calls his father.

Now the death of John’s mother draws the men together for a final showdown. As he sifts through family artifacts in his parents’ attic, the disgruntled son gets a glimpse of the eternally frozen battlefields that left his father scarred – and of the quiet secret love that sustained him across the wasted expanse of wartime Europe.